Accueil > Application > The whole territory mobilised behind the project

UNESCO The whole territory mobilised behind the project 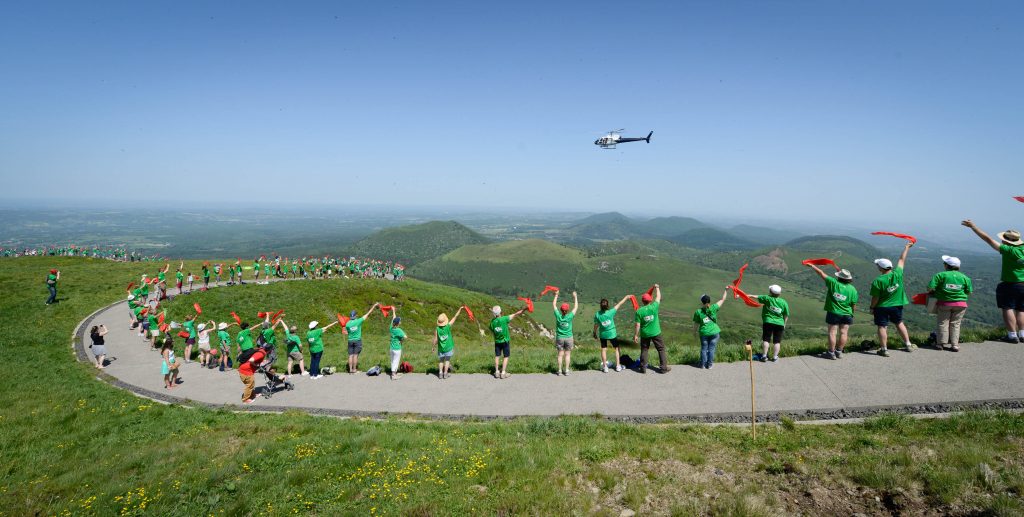 Human chain at the summit of the Puy de Dôme (J. Way)

Throughout the long inscription process the inhabitants of the Puy-de-Dôme, stakeholders in the territory and a number of prominent French personalities were involved to help raise the site’s profile. More than 50,000 supporters’ signatures were collected.

Local support was channelled into personal initiatives (photographic contributions, globe-trotters campaign, etc.) as well as collective ones (presentation of the project at community centres, distribution of leaflets in sports clubs, organisation of events, etc.).

In addition local and national celebrities provided their support to the nomination during the whole of the national selection process: Laurent Bignolas (sponsor of the media pack), Patrick Poivre d’Arvor, Louis Villaret, Françoise Héritier, Claire Chazal, Laure Adler, Patrice Corre, Renaud Lavillenie and Hubert Vedrine, to name but a few.

Involvement by local inhabitants and the existence of site “ambassadors” remains important for the conservation and enhancement of the site. The Departmental Council and its partners wish to continue this within the framework of the management plan by organising participatory events to help develop and promote the site.

Powerful involvement of local authorities and members of the academic community

This nomination bid for the site, supported by the Puy-de-Dôme Department in collaboration with the State, Clermont-Ferrand universities (Université Clermont Auvergne and Vetagrosup) and the Auvergne Volcanoes Regional Natural Park, has received unanimous support from the public authorities. Thus the State, the Department, the Region, Clermont city council (Clermont Auvergne Métropole) as well as the municipalities within the site, have committed to adhere to a communal management plan, largely covered by the State Regional Planning Contract.

The World Heritage site is also part of a wider geological and landscape context. Excellent views of the site can be had from much of the surrounding Puy-de-Dôme and the Auvergne, where interesting morphological features can also be found.
Strong backing from economic stakeholders

A large number of local media bodies signed the Media Pack commitment letter to provide concrete backing for the nomination. This commitment constitutes an essential partnership in terms of the site’s image and dissemination of information about the Chaîne des Puys and the Limagne Fault.
In addition, a large number of local economic stakeholders publicised the nomination, informing both their employees and their clients about the site’s values and its conservation.

They marked their long term support towards the enhancement and preservation of the site through the creation of a Foundation dedicated to helping finance the management plan: The Chaîne des Puys-Limagne Fault Foundation.
The Department and its partners encourage companies to continue their involvement with the site through this Foundation and via other means designed to increase recognition, good practice and information about the site.