To respond to the management issues raised by the World Heritage Committee in their decision in Istanbul, operational measures were initiated in 2016 in close collaboration with the local actors involved. The issue of enhancing the geological outlines has been made the focus of careful and innovative work on three sites:

The emblematic twin craters of the puys de Vache and Lassolas, and their close neighbour the puy de la Mey, show increasing signs of forest encroachment. This search to achieve a balance with the vegetation uses a multi-faceted approach involving animal grazing, complex land management and landscaping via strategic tree felling. This planning is carried out in collaboration with the Auvergne Volcanoes Natural Park, VetAgro Sup (agricultural institute for higher education), the local communes of Saint-Genès-Champanelle and Nébouzat, local farmers and shepherds, as well as all the land owners and rights-owners of the delimited and non-delimited land property.

To show that forestry work can be carried out in a way that preserves landscape quality while also revealing geological outlines, the Joint Association for Forestry Management of the Volvic Sources and Volcanoes and the National Forestry Office have carried out an experiment on the Puy de Chaumont, clearing the crater of trees to make it more visible and thus opening up new landscapes within the Chaîne des Puys.

This clearance of just over one hectare of spruce trees will be offset by planting an area of more than four hectares with mainly deciduous trees. The clearance is carefully planned to maintain the quality of the site’s scenery, as well as the environment and the soil. Once it is finished, a hiking trail will be created so that walkers can visit this neglected volcano.

This is one of the main objectives of the Chaîne des Puys-Limagne Fault Landscape Observatory, due to go public in the autumn of 2019. The Observatory will contain over 150 photographs which will be updated regularly. They will illustrate the main geological attributes of the site, as well as the main management issues: evolution of the vegetation cover, urban growth, new buildings, etc.

Certain scenes have been chosen to follow up on existing photos from the start of the 20th century.

Rewilding of built-up wasteland: the former zoo at the foot of the Puy de Dôme

The Department has bought the site of this former zoo, now an industrial wasteland and an environmental and scenic blackspot, in order to return it to nature. After initial checks into the potential architectural value of existing buildings, these were taken down and the site cleaned up of pollution. Copses and walls which provided shelter to plants or animals were preserved. The land will be returned to pasture, in the form of small, hedged fields, such as occur locally on the Plateau des Dômes.

Restoration of the former Orcines zoo, at the foot of the Puy de Dôme (before and after)

Management and dispersal of visitors

The central part of the Chaîne des Puys is the most highly visited in terms of hikers. In order to reduce the pressure on this relatively fragile sector and to evaluate the visitor numbers to sites open to hikers, eco-counters have been set up at the main sites in the Chaîne des Puys. The data collected will be used to measure the impact of different projects already in place, and to help direct future projects. . A number of volcanic puys provide alternative sites for visitors to explore, such as the Puy de Combegrasse, the Narse d’Espinasse, the Puy de Vichatel, the Puys de Jumes and la Coquille, the Puy de Louchadière.

The preservation of natural sites depends on visitors respecting their surroundings and any traditional practices: dogs must be kept on a lead, and flocks/herds of animals left in peace, walkers must remain on marked paths, not drop litter or pick wild flowers, respect notices and no entry signs, etc. 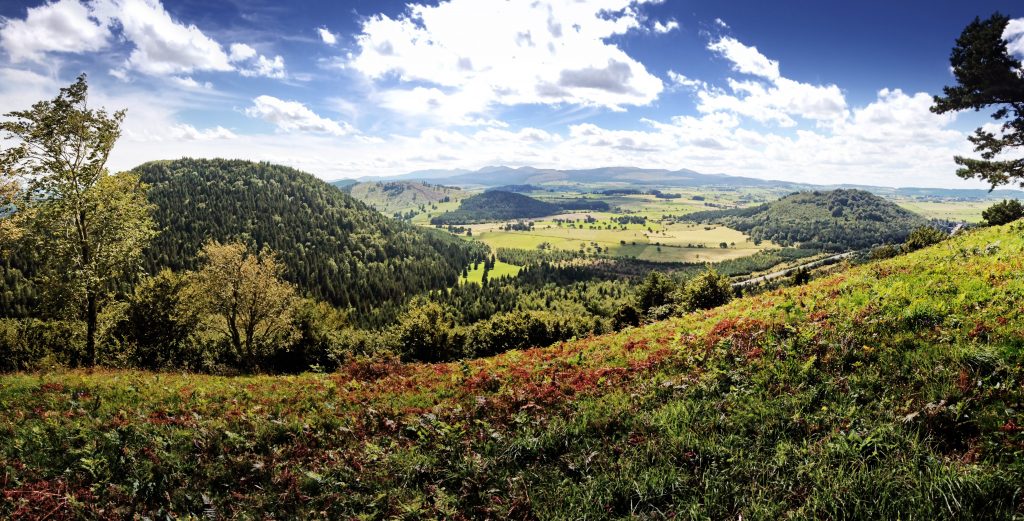 In parallel, several of the volcanoes have been the focus of integrated preservation and enhancement projects, and are now open to the public :

Felling and chipping of Scots pines, the creation of a car park and a walking circuit with signage, animal grazing. 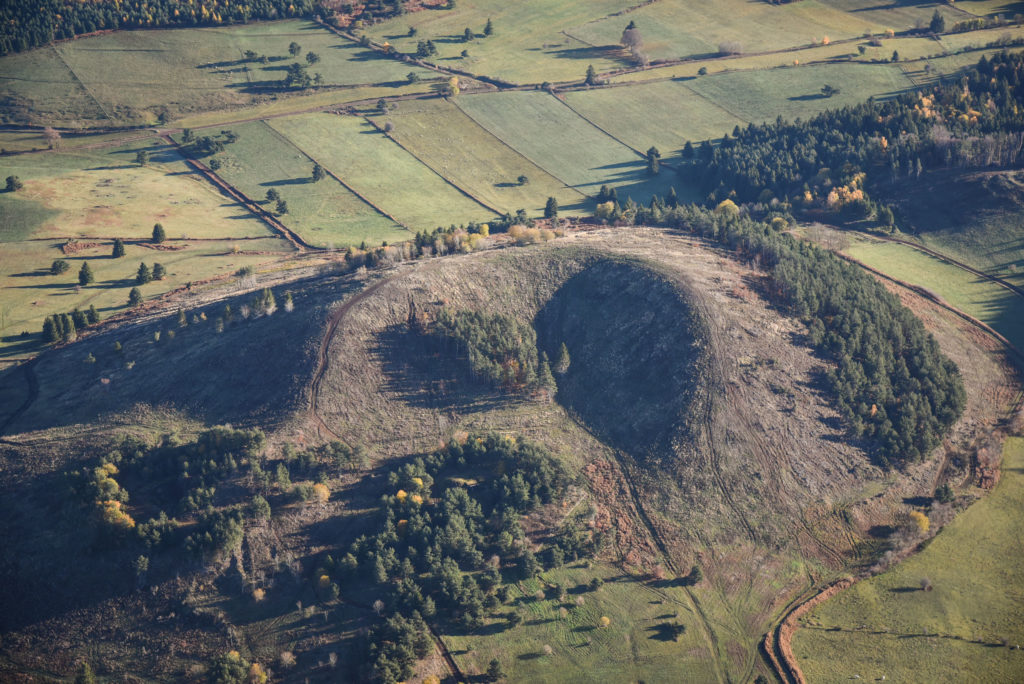 Deforestation of the crater and clearance of the cone, creation of a ‘discovery’ path up the volcano, setting up of eco-counters.

Improvement to transport and parking provisions

One of the objectives of the management plan in terms of transport within the Chaîne des Puys is to reduce circulation on the roads and the impact of roadside parking by improving public transport and parking areas.Bus links between Clermont-Ferrand and the Puy de Dôme and Volcania have been improved, and a cycle tour loop has been created.

In addition parking areas which were deemed either dangerous in terms of traffic circulation, or to negatively impact the landscape, have been removed. In return, parking areas have either been renovated (car parks at the Puy des Goules and la Ventouse) or created (Puy de Combegrasse and Beauregard). 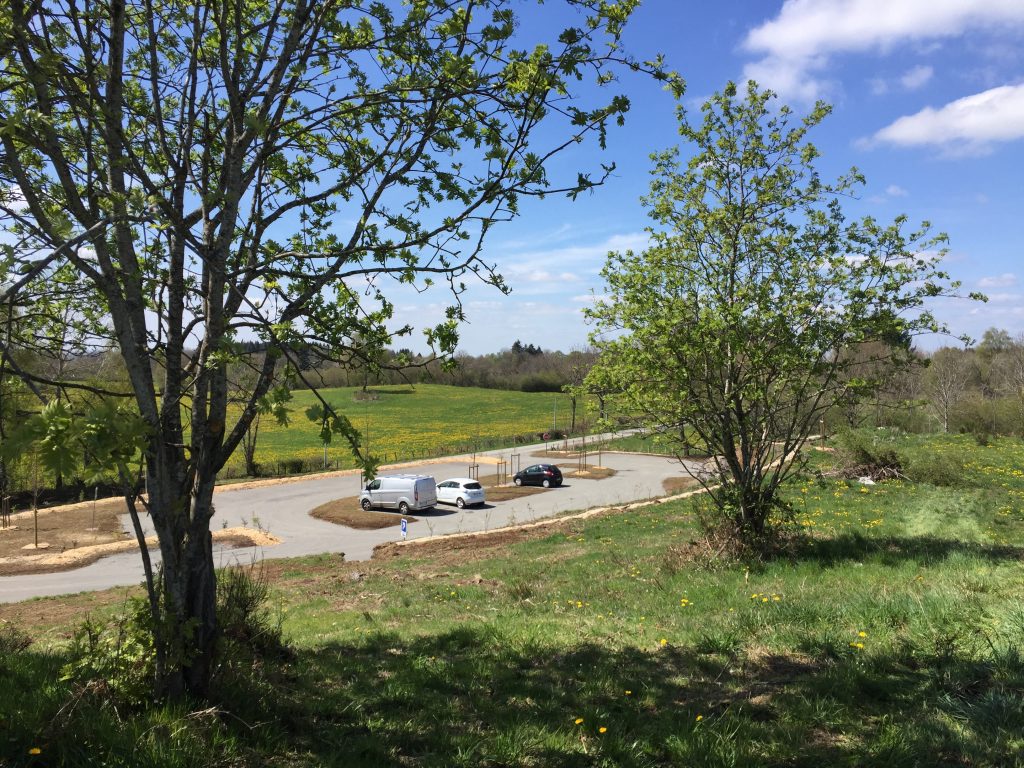 New car park at Beauregard, start point for hikes to the Puys de Louchadière and Jumes and Coquille ©CD63